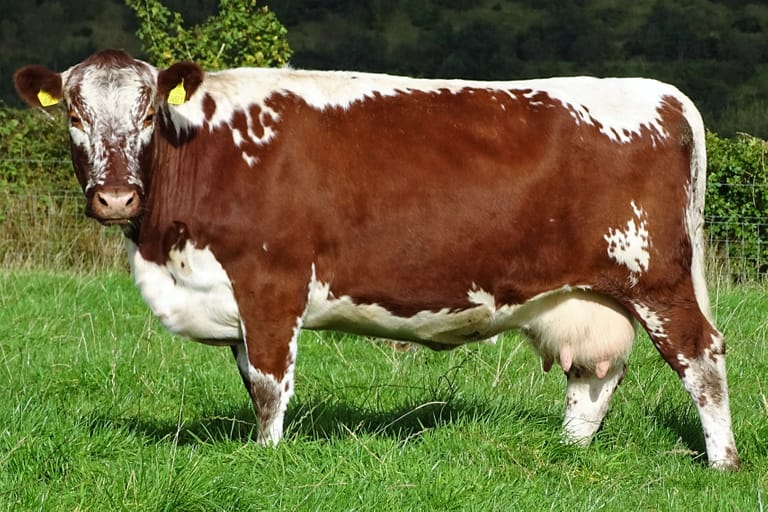 Topping the sale and setting a new breed record price at public auction of £3,800 was Curraghnakeely Cherry 0453 EX91, a lovely well balanced, perfectly coloured, four and half year-old cow, consigned by N & M Moilies (Nigel Edwards & Michelle McCauley) bred in the Curraghnakeely herd of Nigel Edwards at Tempo, Co. Fermanagh, will make the short journey of one county south, to brand new Irish Moiled breeder James Gilheaney of Carrick-on-shannon, Co. Leitrim who also bought at the sale a heifer calf of Robert Boyle of Millisle. Co. Down, Beechmount Mags at £2,100 to kick start his new Irish Moiled herd.

Third highest price of the day was £2,900 for a very stylish young heifer Beechmount Lizzie owned by Robert Boyle of Millisle, Co. Down, will make the long road trip down the length of the island of Ireland, purchased by a repeat buyer from the 1st Magnificent Moilie online sale, Joe Boyce of Kilmallock, Co. Limerick. 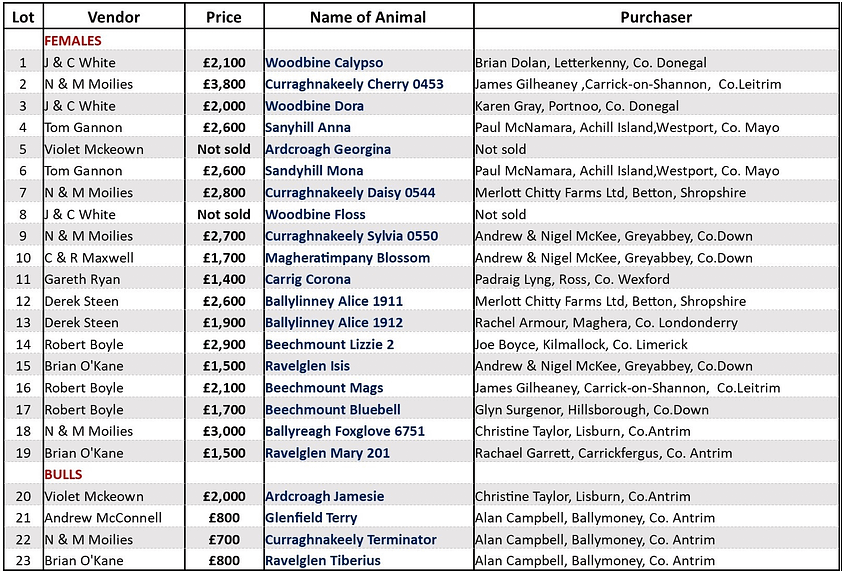 The fourth and fifth highest prices of the sale were for two 18-month-old heifers, again from the Curraghnakeely herd at Tempo, Co. Fermanagh consigned by N & M Moilies. Curraghnakeely Sylvia 0550 was knocked down at £2,700 and was purchased by Anrew & Nigel McKee of Greyabbey, Co. Down who bought 3 females in total in the online sale including another young heifer from R&C Maxwell of Keady, Co. Armagh, and a heifer calf from Brian O’Kane, Martinstown, Co. Antrim to add to their new Irish Moiled herd established a few months ago.  Curraghnakeely Daisy 0544 fetched £2,800 and is the only animal from the island of Ireland heading across the Irish Sea, purchased by a repeat buyer from the 1st Magnifient Moilie online sale, Merlott Chitty Farms Ltd from Breton, Shropshire who also added to their new herd established 13 months ago by purchasing at the sale from their own side of the ‘water’ at £2,600 a heifer owned by Derek Steen of Moffatt, Drumfriesire, Ballylinney Alice 1911, a 16-month-old maiden heifer, a twin to another heifer, her sister also entered in the sale, Ballylinney Alice 1912 making her way across the Irish Sea in reverse direction to well known Irish Moiled breeder Rachel Armour of Maghera, Co. Londonderry.

£2,600 was fetched by a further 2 animals. A first-time vendor in an online sale was Tom Gannon of Charlestown, Co. Sligo with 2 entries, both 30-month-old springing heifers, Sandyhill Anna and Sandyhill Mona, both from the same cow family, both with A.I only breeding in their back-pedigree, both with a very similar appearance and both were sold for £2,600. These two ‘stable-mate’ heifers were purchased by the same buyer, traveling only a mere 40 miles due west to Achill Island, Co. Mayo to the home of Paul McNamara.

Further top prices went to J&C White of Ballymitty, Co.Wexford of £2,100 and £2,000 for young homebred cows, Woodbine Calypso and Woodbine Dora, both making the long road trip up northwards to Co. Donegal to Brian Dolan Letterkenny, Co. Donegal, and Karen Gray of Portnoo, Co. Donegal respectively to add to their herds that were both established in the last 18 months.

Ardcroagh Jamesie, a young homebred bull owned by Violet McKeown of Kircubbin, Co. Down was tapped down at £2,000 to new breeder Christine Taylor of Lisburn to add to her already newly established herd of Irish Moileds.

This is the 3rd IMCS Magnificent Moilie online sale conducted by highly respected auctioneers Harrison and Hetherington’s, it has given both vendors and buyers especially new breeders the accessible and convenient opportunity to sell and purchase Irish Moiled genetics from all three constituencies (Great Britain, Northern Ireland, and Republic of Ireland).  It had been a busy couple of days of bidding with things getting very interesting in the last couple of hours which then saw the Irish Moiled breed reach record results.

The IMCS would once again like to respectively thank Harrison & Hetherington, Auctioneers, to everyone who put in the hard work in the run up to the sale, to all the exhibitors who entered cattle and especially wishing everyone success with their new purchases.