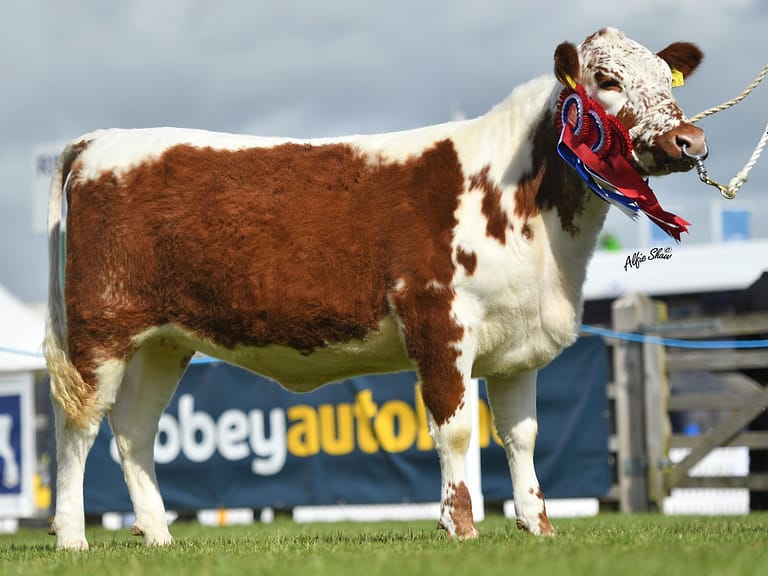 Derek Steen from Moffat, Scotland, a renowned pedigree livestock breeder and a familiar judge to many throughout the UK and Ireland, thoroughly enjoyed the fantastic turnout of outstanding, well-presented Irish Moiled cattle from breeders right across all corners of Northern Ireland at this year’s Balmoral Show.

N & M Moilies (Nigel Edwards and Michelle Mc Cauley) based at Dungannon, Co. Tyrone scooped two of the Irish Moiled championship titles with their eye catching, perfectly presented one year old junior heifer, Curraghnakeely Sylvia 0563. The first title to be won by this young Sylvia heifer was the junior championship title along with the Massey’s of Saintfield Butchers cup for junior champion and the second title scooped was the prestigious title of overall Irish Moiled supreme champion along with the Pennielea trophy for Irish Moiled champion.

Curraghnakeely Sylvia 0563, a tremendously well-bred heifer, bred in the well-known Curraghnakeely pedigree Irish Moiled herd of Nigel Edwards at Tempo, Co Fermanagh is the third successive generations of animals to collect championship title awards at Balmoral show. Her mother, Curraghnakeely Sylvia 1st won overall Irish Moiled champion in 2017 as a young 2nd calver cow and her grandmother, Roes-Hall Lizzy was crowned reserve overall Irish Moiled champion as a senior cow in 2016. The judge commented that this animal is as near perfect to his vision of a perfect Irish Moiled, possessing much width and power with quality and correctness.

Brian O’Kane and family from Martinstown, Co. Antrim also had a very successful day, when their senior heifer winner, Ravelglen Josie, a strong, well-balanced quality 2-year-old 1st calver with a young bull calf at foot was tapped out as reserve overall Irish Moiled champion. This was the first time a heifer in the Irish Moiled senior heifer class had been shown with a calf at foot, a true reflection of progress for the Irish Moiled breed and indeed the judge commented that this animal is a tremendous example of the functionality of the Irish Moiled breed, and is a quality, correct animal with a bright future a head of her.

New Irish Moiled breeder Rachel Garret of Carrickfergus, Co. Antrim won junior champion with her quality, well balanced junior heifer, Ravelglen Bidi. It was a great accolade for the Garrets, their first time to show Irish Moiled cattle. The judge commented on how perfect their animal was.

The first class of the day was the cow class which consisted of seven entries all of absolute tremendous standard. Taking first prize was Robert Boyle from Millisle, Co. Down with a superb second calver Irish Moiled cow, Beechmount Ann with a lovely bull calf at foot.  Second place went to Robert Davis from Templepatrick, Co. Antrim for his senior cow, Ballyvesey Iontus, also with a beautiful young bull calf at foot. Third place went to Andrew McConnell from Glenwherry, Co. Antrim with his attractive young cow, Loughshore Ada-Marie. The judge commented on the great capacity of his two leading cows, both having strength but are not too heavy which is important to retain the breeds traits, so that the Irish Moiled can be grazed on poorer pasture and wetlands, foraging on a wide variety of plants, that they will source food even if grass is not plentiful or of poorer quality and they will do their job of rearing a calf just as the Irish Moiled cows with calves at foot on display here today are doing.

The next classes up were the senior and junior heifer classes which contained all the cattle to eventually win all the championship title awards. The senior heifer class winner, Ravelglen Josie from Brian O’Kane was the eventual overall reserve champion.

The junior heifer class was the largest class of the day and the class that most impressed the judge, Derek Steen. Eight entries were put forward, the judge commented he was delighted with the turnout in this class, the standard of cattle, the way they were presented to such a high standard. His top two animals in this class Curraghnakeely Sylvia 0563 and Ravelglen Bidi were picture perfect, exactly what you would want an Irish Moiled to look like, they were both absolutely eye catching with exceptional locomotion, they did not just walk into the ring they flowed into the ring and the only difference in the heifers were that the heifer placed first and eventually junior champion and overall breed champion had more size and power over the heifer in second place which eventually was tapped out as reserve junior champion.  Third place went to Curraghnakeely Pandora 0564 put forward by N & M Moilies (Nigel Edwards & Michelle McCauley)

The Judge also wanted to mention how delighted he was to see two new Irish Moiled exhibitors at Balmoral – the Garrett family from Carrickfergus and Christine Reddick and family from Lisburn who not only brought their animals out extremely well presented, but they also brought with them new energy and enthusiasm.  Coming to a show as big as Balmoral there is no better place to meet other breeders, gain experience and pick up tips to progress further in the breed.

Brian O’Kane had the winner of the senior bull class Woodbine Casper an impressive five-year-old senior stock bull from the Ravelglen herd who has won numerous red rosettes in his show career. Second place went to new breeder Christine Reddick from Lisburn with her young stock bull Ardcroagh Jamesie who literally had been out working covering cows right up to the week of the show.

Immediately after the judging of breed classes, judge Derek Steen with an Irish Moiled representative, the chairperson of the Society chose the Irish Moiled cattle to represent the breed in the pair, group of 3 and group of 5 interbreed competitions later in the week. In the Interbreed pairs competition the animals selected was the powerful heavyweight bull, Woodbine Casper owned by Brian O’Kane and the equally powerful young cow, Beechmount Ann owned by Robert Boyle. Interbreed judge, William Smith had no hesitation in tapping out the matching Irish Moiled pair for the reserve spot in the Marks and Spencers Interbreed Native Beef breed pairs championship.

In the group of 5, the original Irish Moiled pair was used with the addition of 3 junior heifers, Curraghnakeely Pandora and Curraghnakeet Sylvia from N & M Moilies and Ravelglen Bidi owned by Rachel Garrett. The group of 5 Irish Moiled’s got an honourable mention from interbreed judge nearly getting reserve champion in the Interbreed Native Beef breed group of 5 just pipped by the Beef shorthorns. The judge explained that two of the three Beef shorthorn heifers were 2-year-old senior heifers however all three of the Irish Moiled heifers were junior 1-year olds and on the day, he decided to go with the Beef shorthorns.

The Irish Moiled exhibitors were delighted to be presented with the with the reserve prize in the Linden Foods Beef presentation awards by Judges Alex Woods and Renton Ledbetter. The object of this award is to assess each breed on how the exhibitor’s market and promote their breed, the presentation of cattle, how breeders care for their animals over the week, keeping their stalls and lines clean and tidy.

Breed chairperson Brian O’Kane said “It has been a very successful week for the Irish Moiled breed thanking all the exhibitors for entering some outstanding Irish Moiled’s which certainly had caught the attention of not only our own breed judge but other judges and onlookers, mentioning that it has been very encouraging to see new breeders’ get involved and exhibit their Irish Moilies.  Brian went on to thank judge Derek Steen for taking time out to come over to Northern Ireland to judge the Irish Moiled’s, interbreed judge, William Smith for his comments, Balmoral Show for giving us the opportunity to showcase the breed, Libby Clarke and the cattle committee for all their hard work, Raymond Bready for his commentary on the day, the stewards lead by Linda Davis for all their help on the day. A special thank you to Pedigree Sales, a new sponsor of the Irish Moiled junior championship class at Balmoral.

As things get back to normal from covid lockdown, alongside all local agricultural shows the Irish Moiled Cattle Society hope to see breeders attend the classification workshop which is taking place on 21st June at Linda and Robert Davis’s farm at Doagh, Ballyclare, Co. Antrim, the virtual AGM which takes place via zoom on 3rd August at 7.30pm and a day visit to Killua Castle, Co. Westmeath which are having an Irish Moilie Beef Day on Sat 3rd September.   Without having to leave the farm, breeders will have the opportunity to enter cattle into the online virtual show, which is happening on 10TH September, judge will be Dan Bull from Drumfrieshire, Scotland. The Autumn Magnificent Moilie Online Timed Auction will take place 27th– 29th Sept.  The IMCS couldn’t do any of this without the support of the Irish Moiled breeders and our breed Secretary Gillian Steele in advance of all these events please accept our gratitude.