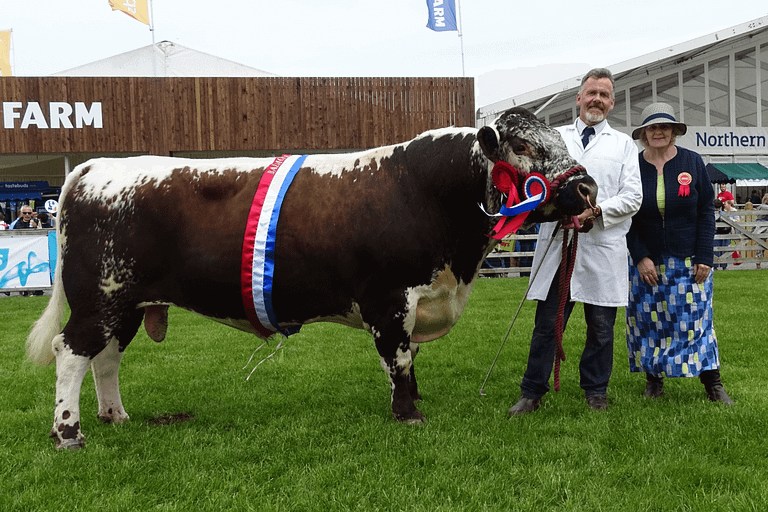 Louise Smith from England a well-known retired Irish Moiled breeder of the Yarningale herd had the incredible privilege of judging one of the largest ever entries of Irish Moiled cattle, with a total entry of 34 animals, a reflection of the increasing popularity of the breed, giving the public a spectacular display of Irish Moiled cattle to view at Balmoral show.

Robert Boyle of Millisle, Co. Down won the Overall Irish Moiled breed champion and the Pennielea Cup with his senior bull, Tyrone Firecracker bred by Eddie Giboney of Beragh Co. Tyrone. The judge reported… ‘’ it was difficult not to give this bull full credit; 7 years old in his working clothes, straight out of the field, fabulous frame, fleshing, mobility, length, perfect top line, lovely square shape to his rump, nice shoulders, classic Irish Moiled markings and good eyes. For me it was his ability to do so much good for the breed’’

It was the junior heifer, Curraghnakeely Bluebell exhibited by Nigel Edwards and Michelle McCauley (N & M Moilies) of Dungannon, Co. Tyrone, bred by Nigel Edwards of Tempo, Co. Fermanagh that won the reserve overall Irish Moiled breed champion title as well as the junior breed champion title along with the Masseys Butchers of Saintfield cup. The judge reported that… ‘’this heifer grabbed my attention the moment she entered the ring, for me she had absolute show presence, there wasn’t a moment my glance fell up on her that she wasn’t holding herself perfectly, filled me with the excitement of so much potential’’

The cow class which consisted of three entries was won by Robert Boyle with the 6-year-old cow, Milltown Pink Lady bred by Tommy Jackson of Saintfield, Co. Down followed closely in second place was the homebred soon to calve, 5-year-old cow, Ballyvesey Joan owned by Robert and Linda Davis of Ballyclare Co. Antrim. In third place was the young 3-year-old homebred cow, Beauty Hill Ferrari owned by A & J Baxter of Newtownstewart, Co. Tyrone. The judge reported… ‘’The choice between 1st and 2nd place in the cow class was one of the hardest decisions of the day. In 1st place I had Milltown Pink Lady from Robert Boyle a big strong, well framed and well fleshed cow, plenty of milk with a well grown smart 1 month old calf at foot and in 2nd place was Ballyvesey Joan from Robert Davies a springing 1st calver with the most beautiful udder set nicely at hock height with good attachment front and rear, strong medial ligament, perfect size teats.’’

The senior heifer class that consisted of six entries was won by the homebred heifer, Hyland Ivanka owned by Alan Mooney all the way from Co. Kildare, Republic of Ireland, his first time to exhibit at Balmoral show. In 2nd place was Rachel Armour of Maghera, Co. Londonderry with Beechmount Jasmine bred by Robert Boyle. In 3rd place was the homebred heifer Ravelglen Kiera owned by Brian O’Kane of Martinstown Co. Antrim. The judge reported… ‘’The senior heifer winner, Hyland Ivanka owned by Alan Mooney was a beautiful, deep ribbed classy animal’’

The junior heifer class consisted of 14 entries, one of the largest classes of Irish Moiled cattle of all time. In first place was Nigel Edwards & Michelle McCauley with Curraghnakeely Bluebell, the eventual junior breed champion and overall reserve breed champion winner. In second place was Robert Boyle with Cultra Mary bred by the Ulster Folk and Transport Museum at Holywood, Co. Down. Third place went to new breeder, Alana Bloomer from Dungannon co. Tyrone, her first ever time to exhibit Irish Moiled cattle, with Beechmount Halley bred by Robert Boyle.

The pairs class consisted of 7 entries, all absolute tremendous standard. In first place and winning the Tully Farm Cup for champion Irish Moiled breed pair was the male and female junior pair of Nigel Edwards and Michelle McCauley of Curraghnakeely Clover and Curraghnakeely Icicle. In second place was the male and female senior pair of Robert Boyle of Tyrone Firecracker and Milltown Pink Lady. In third place was the dainty young junior female pair of Alana Bloomer of Beechmount Halley and Beechmount Blossom. All the prize-winning pairs were of incredible standard.

After judging, Louise Smith had then the duty of selecting the cattle to represent the Irish Moiled breed in the Native Interbreed Pairs and Group championships, she had no hesitation in picking all her animals from the junior bull and junior heifer classes, first choosing the champion breed pair along with the junior champion heifer all owned by Nigel Edwards and Michelle McCauley. This young group of three was to be tapped out by Pairs and Group of Three Native Interbreed judge, Shane McKiernan from Co. Cavan, Republic of Ireland for his reserve champion in the Native Interbreed Linden Foods Beef Group of Three Championship.

Interbreed success was not to stop there for the Irish Moiled breed when the Native Interbreed Group of Five judge, Richard Bartle from Herefordshire, England was impressed with the eye-catching ‘peas in a pod’ group of five all junior Irish Moileds, 1 bull and 2 heifers from Nigel Edwards and Michelle McCauley and two further heifers from Alana Bloomer. With no deliberation, judge Richard Bartle selected the Irish Moileds as his reserve champion in the Native Interbreed Group of Five championship sponsored by LMC.

Breed Chairman, Robert Boyle said… ‘’it was a great week for the Irish Moiled breed’’, and on behalf of the Society he thanked all the Judges, Stewards, Sponsors and Balmoral Show Committee, he also made special mention to all the exhibitors on their tremendous support and standard of Irish Moiled cattle both from Northern Ireland and the Republic of Ireland and last but not least the number of entries from new and young breeders.