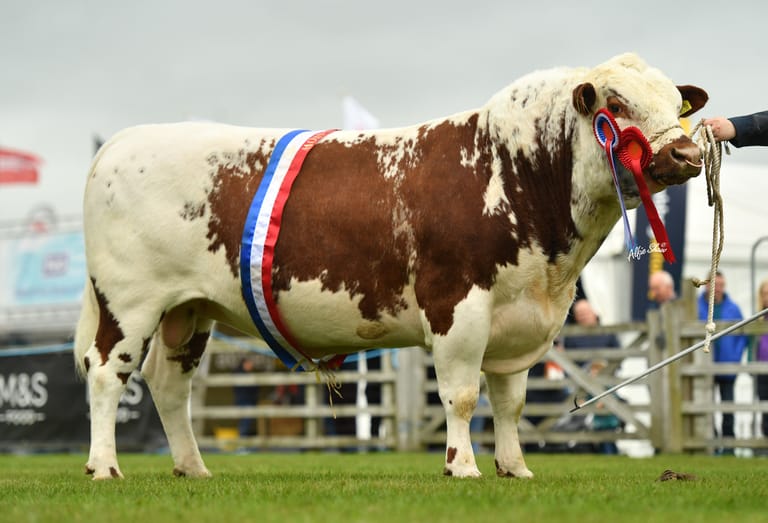 IRISH MOILEDS BACK IN ACTION AT BALMORAL

Mr Paul Boal, a classifier of the Irish Holstein Friesian Association from Tuam, Co. Galway was in charge of placing the Irish Moiled’s at Balmoral, RUAS Show 2021.  This year rather than the traditional date in May, Balmoral show was postponed to September 2021 due to the Covid-19 pandemic which had saw the previous year’s 2020 Balmoral Show cancelled.

Woodbine Casper, an impressive senior stock bull of the Ravelglen Irish Moiled herd owned by Brian O’Kane and family was crowned the overall Irish Moiled breed champion, the family taking home the prestigious accolade and the Pennielea Trophy for their first time. This four-year-old powerful Woodbine Casper bull is no stranger to the showring having won numerous red rosettes most notably at Tullamore show in 2019 and in August 2021 he won the overall champion in the haltered section of the virtual Irish Moiled Cattle Society online show. Casper was bred by James and Ciara White from Co. Wexford out of Glassdrummond Lily 18 VG88 and by the Woodbine herd’s long standing stock bull, Tully Jack EX92. Woodbine Casper EX95 is the main stock bull of the Ravelglen herd, at Martinstown, Ballymena, Co. Antrim running with their 40-pedigree herd of Irish Moiled’s.

Overall reserve Irish Moiled breed champion went to Robert Davis and family from Doagh, Ballyclare, Co. Antrim with an 11-year-old cow, Ballyvesey Palm EX90 out of Ballyvesey Snowdrop and sired by Ballyvesey Ben – a tremendous hardworking homebred cow who is certainly earning her keep, rearing her 10th calf, a wonderful example of the breed.

Reserve champion pair of Irish Moiled animals went to Ryan and Caroline Maxwell of Keady, Co. Armagh with the young cow, Beechmount Daisy 6th sired by Tyrone Firecracker EX96 and their young stock bull Ravelglen Rodan sired by Curraghnakeely Pokemon both these animals had been placed 2nd in their respective classes earlier in the day.

The Junior bull class was won by Violet McKeown of Kircubben, Newtownards, Co. Down with her promising young homebred bull Ardcroagh Jamesie out of Ardcroagh Viola and sired by Ardcroagh John.

“It was a great pleasure honour and privilege to be asked to judge the Irish Moiled’s at Balmoral, the breed that I consider as my adoptive breed. It is just fabulous to be standing here today doing this job. The standard of cattle, together with their turnout and presentation is a credit to everyone involved.  Thank you to RUAS for inviting me to Judge.

The winner of the cow class, Ballyvesey Palm is a magnificent 11-year-old cow that has reared 10 calves, a great example of the breed, a cow full of breed character and is looking good and which went on to be my eventual reserve overall champion. The cow in 2nd place, Beechmount Daisy a young cow with also lots of breed character with a fabulous udder.

In the junior heifer class, the top 2 heifers were of impeccable standard, in 1st place was Curraghnakeely Penny-Lee displaying great strength, again with much breed character, gave way to the heifer in 2nd place, a much younger heifer, Beechmount Lizzie 2, displaying a lot of style and strength. Two fabulous young heifers, tremendous examples of the breed and it was these 2 heifers that I tapped out as my junior and reserve junior champions.

The junior bull class was won by Ardcroagh Jamesie, a young bull with strength through his front.

The senior bull class was won by Woodbine Casper, an outstanding example of the breed, a bull with tremendous strength and power with tremendous locomotion. A working bull in fit but not fat condition which is difficult to achieve as a bull gets older but that cannot be said of this bull today, he is in superb condition and that is why I have no hesitation to put this bull as my overall breed champion of the Irish Moiled breed today.”

The IMCS would like to express their gratitude to Judge Paul Boal, stewards Alan Armstrong, Linda Davidson and Marjory Blackburn on the day, Raymond Brady for his commentary, RUAS staff and cattle committee for all their hard work in putting together a fantastic show, Agri Images for taking photos and of course the Irish Moiled breeders who had put so much time, effort, and work into turning their cattle out to such a high standard.

A few of the prize-winning animals will be coming up for auction alongside several other elite pedigree cattle in the online virtual Magnificent Moilie Autumn Sale taking place from Thursday 14th October to Saturday 16th October through auctioneers Harrison & Hetherington, Carlisle.  For further details on cattle entered and how to register to bid please visit either the IMCS website or H & H website.  Breed secretary Gillian Steele can also be contacted on