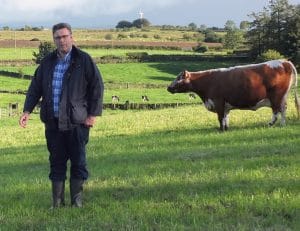 It has been only three weeks since my last update but with the Brexit situation accelerating.

It is only appropriate that I update you on what has transpired into one of the most important issues the Directors of the Society have had to deal with in a long time.

We received a copy of a letter included below issued by DEFRA from our data base provider Grassroots.

Up until then it had been indicated by DAERA that there was a possibility of an agreement under the NI Protocols and indeed the Society had engaged in a number of meetings and carried out a lot of work to comply with legislation to facilitate this.

Unfortunately, this has been fruitless and we have been left with the reality that if action is not taken and completed before 1st January 2021 the Society will lose all animals registered within the EU from the Herd book.

A simple explanation would be that Zootechnical Legislation, which deals with breeding programmes, was not negotiated within the Article 50 trade negotiations, so has basically been overlooked.

The EU has legislation that currently does not allow animals held within the EU to enter breeding programmes from outside the EU.

The UK will be subject to the same legislation after the 1st January 2021.

On the other hand the EU will allow animals from a third country to enter breeding programmes within the EU.

After a lot of work and many Zoom meetings the Society’s Brexit Committee has looked at a number of options and has taken them to the Board of Directors where a decision has been made to pursue a specific proposal.

The driving force behind the decision was a unanimous agreement that the Irish Moiled Cattle Society and the Herd book would stay together and would move forward as a united unit.

After careful consideration the proposal was passed that the offices of the company would move into the EU at an address within the province of Ulster as recognition of the breeds origins.

An application would be made to have the Irish Moiled Cattle Society recognised as a breed operation under European Regulation.

Another application will be made for the approval of a breeding program within the EU.

Many UK based  breeds are affected but we are unique in our situation and it offers solutions not open to others . For this we can only be grateful.

This has been difficult decision for all involved and would signal a new chapter in the breeds history I think that it offers many opportunities to further the progress of the breed.

The availability of funding and the ability to pursue up to date Genomics offers a opportunity to progress the breed as a body of animals with none being excluded.

I will keep you up to date with further development and if you have any queries or reservations, we have a network of Directors and a very helpful Secretary that will be happy to assist.