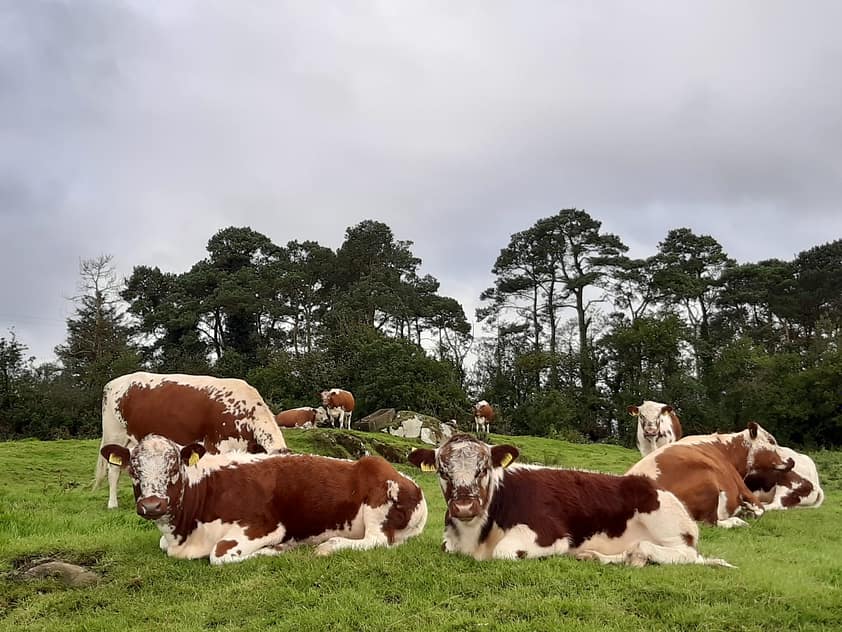 Glassdruumond Fionn Prince, a largely white Irish Moiled bull with red ears will be offered for sale at the Magnificent Moilie Spring Sale from the herd of Sam Smiley of Ballynahinch.

He is eligible for export having tested negative on 13th April as part of a herd test.

(Photos are of Fionn Prince as a baby calf with his mother.)

Greg Walsh, in his book…. ‘Cattle Breeds in Ireland A History’ outlines the presence of white cattle with red ears in Ireland thousands of years ago. Cattle with these markings still occur within the Irish Moiled breed although they are quite rare.

Over the years there have been several white, red eared cows in the Glassdrummond herd mainly in the Cherry and Lily cow families. However only one bull of this colour, Kilgreaney Melin has been used in the herd. He was born in 1994 and was a son of Glenbrook Defender. After being used, he was sold to Tom Clarke of the Springfield herd. 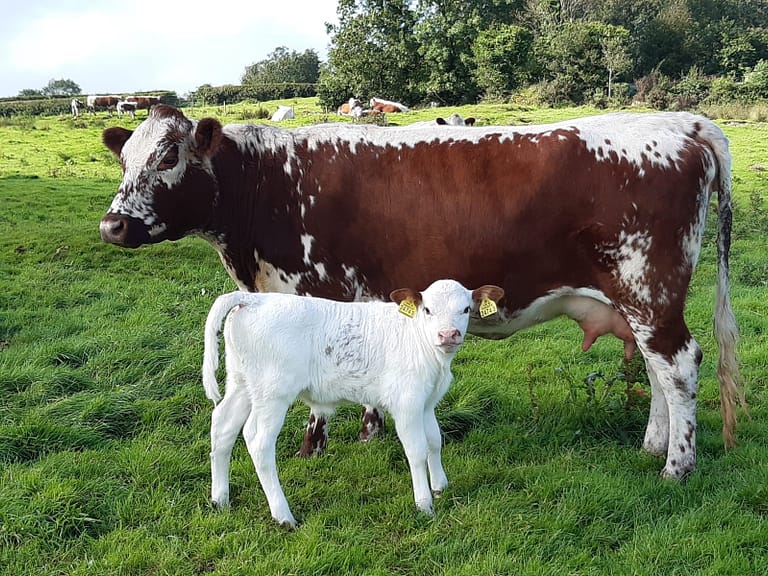 Fionn Prince is the first mainly white bull the Glasdrummond herd has offered for sale. His breeding is impressive…. on the sire side there are 3 successive generations of Excellent bulls…. Ballylinney Harry EX92, Glassdrummond Tom 10th EX92 and Hillview Tom EX92. On the dam side…he is descended from the Cherry Line with his grandmother scoring EX93-2. His mother is a dark red coloured female, has never been classified as she has never been suckling when the classifiers visit in June. Fionn Prince is of good conformation and weighed just over 250 kg at 200 days. (ADLWG of 1.1kg per day)

This bull would be a particularly good option for either a pedigree Irish Moiled herd or for cross breeding.

The Magnificent Moilie Spring Sale will take place by an online timed auction through Harrison and Hetherington, Agricultural Auctioneers, Carlisle from 12 noon on Thursday 6th May concluding noon on Saturday 8th May. Full catalogue will be release shorty by H & H but meantime please follow the IMCS Facebook page and website.