Herd Profile – Irish Moileds in the far North of Scotland 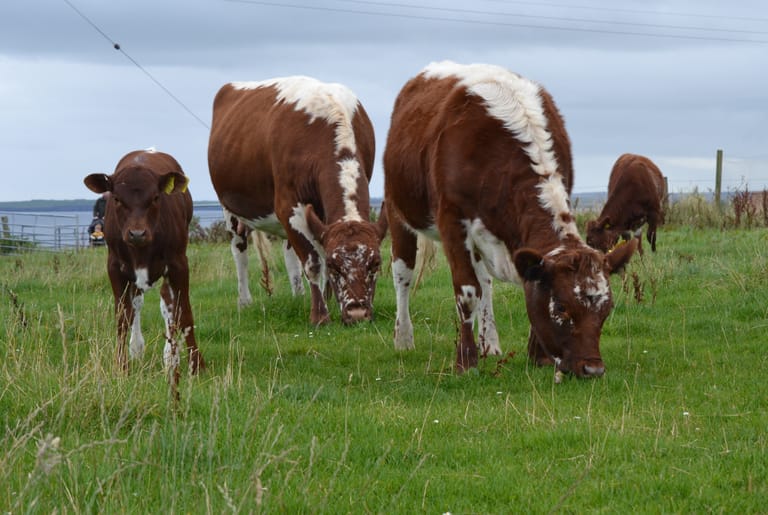 Sally Crowe Owner Of The Linglass Herd Of Irish Moiled Based In Keiss, Scotland 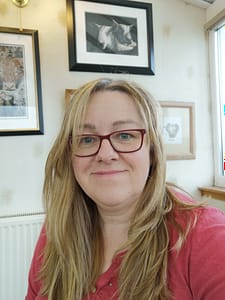 I am Sally, a crofter from Keiss in Caithness in the far north of Scotland.
I’ve had Moilies just over 4 years now. I took over my parents’ croft, a few years ago, at the age of 26. I spent a good lot of years attempting to breed commercial show cattle, with some success, and too many failures to mention.

I am a wee bit of a Facebook addict; I get a lot of my ideas from other farmers pages from around the world. Five or so years ago a friend James, started sharing pictures of this really, really pretty white and red cow. At the time I had never heard of Irish Moileds, they are not common in the Highlands at all. After liking a few photos and commenting I eventually asked what breed she was, ‘Mollie’ was the answer and truthfully, I was still none the wiser.

A quick google search turned into a lost 5 or 6 hours reading up, looking at photos, and rapidly falling in love with the Irish Moilied cows. The more I read the more I knew they would fit into my croft and to the way I wanted to go with cattle.

Easy calving was the 2nd thing that got me hooked. Polled is another huge plus, if I can cut out a vet visit here then I am more than happy.  I managed to get a few Moilies steaks, and some mince to taste, if I was not hooked before, I sure was after eating it.

I was lucky enough to be able to buy 2 heifers from Valerie Orr, a yearling, and a 2-year-old, we are both in the same High Health scheme, which was even better, 2 years later I bought 2 Mollie x shorthorn heifers.

Four years on I have both my Irish Moiled’s – Berry and Louise calving this year, and my 1st homebred heifer, Linglass Bluebell going to the bull. I bought a bull, Ravelglen Ruben at the 1st Magnificent Moilies online sale and was able to sell Linglass Buster, my 1st, and probably only homebred bull. I entered Bluebell in the Online show last year and was delighted to get 2nd prize in the unhaltered heifer class and went on to get reserve champion for the GB constituency. The online show lets me go up against other Moilies in what otherwise would or could be a long time before I get the chance to compete in a live Irish Moilie class.  Over the next few years, I plan to get up to seven pure cows, selling the heifers for breeding and any steers will go into beef boxes.

I’ll definitely be keeping an eye on the Irish Moilied Cattle Societies Magnificent Moilie Online Timed Auction coming up in May, and hopefully getting another bloodline. The first ever sale held by the IMCS was so easy for me, being able promote, sell, view and bid all from the comfort of my croft.  My own bull entry in the sale never had to leave the farm until travelling to his new home in Carlisle. Within a week of the sale after buying  my new stock bull, he arrived on farm after travelling from Northern Ireland through hauliers Andrew Ewing and Armstrongs, with little to no stress for me.

I became a director in October time last year, just in the middle of the Brexit and SNPs changeover. It has been a huge learning curve to say the least. Zoom meetings are fabulous for me, I can be at home in Caithness speaking to all the other directors. I hope to get over to a meeting when we are allowed to travel again, from here it’s a good 2or 3-day round trip.
I hope I can help the breed grow, Ive sold a moilie x heifer locally for breeding, Ive got more folk interested in ‘that fancy coos you keep’. Facebook is once again playing its part in selling them, hopefully I’ll get someone hooked like it got me hooked on the Moilies.

A little insight into the Irish Moiled breed

The Irish Moiled cow is an ancient hornless breed of cattle native to the island of Ireland. Traditionally a medium sized breed used for meat and milk. Hardy and renown for being one of the most hardworking suckler cows.  They have earned their right in also being an economical suckler with calves having smaller birth weights, leading to less intervention or costs associated at calving time, plenty of milk,  they produce and rear a thrifty hardy calf  even when grazed on marginal land, they are naturally polled, they live long and can calve well into their teens.

Irish Moiled beef is a premium beef reared by a team of dedicated breeders using traditional farming methods in a highly ethical environment. Rearing standards are set out by the Irish Moiled cattle society. Each animal comes with a certificate issued by the Society. This certificate proves the animal is 100% Irish Moiled pure bred backed up with DNA parenting tests carried out by the society. The society encourages all purveyors to be registered or supplied by a registered wholesaler.

The breed has an exceptionally low environmental impact and are used in many instances in specialised conservation grazing projects. The breed can graze on a wide variety of plants including ash, ivy and willow. Their grazing helps to encourage growth of a wide range of plants and flora. It is well known that the Irish Moileds is one of the few breeds of cattle that will graze on rushes.

Irish moiled beef is predominantly fed on a grass-based system with outside grazing all year round possible. Where the ground conditions allow. They key to the Irish Moiled’s success in being outwintered is due to their medium size, a mature Irish Moiled cow usually weights in at no more than 550kg to 600kg making them light footed on the ground.

The Irish Moiled Cattle Society will be holding their 2nd  Magnificent Moilie online timed auction which will include a number of elite bulls and a selection of females through auctioneers  Harrison & Hetherington.  This will take place from noon on Thursday 6th May concluding noon on Saturday 8th May 2021.  For further information please either contact breed secretary by email at or visit the Irish Moiled Cattle Society website.