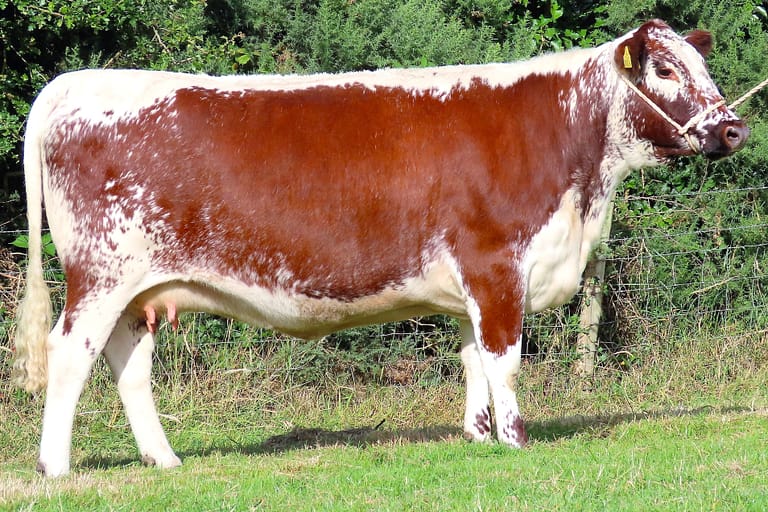 The response to the Online International Irish Moiled Cattle Show 2022 from breeders has again been incredible and the standard fantastic.  There were over one hundred entries from all three constituencies in the haltered and non-haltered sections, breeders submitted three photos and a short video. With twenty classes to work through and eleven championships the judge, Dan Bull from Dumfriesshire, Scotland had a very busy time scrutinizing all the photos and videos put forward which he described as “difficult but a very pleasurable experience”.

The Irish Moiled, a cattle breed steeped in history, an Irish and UK native breed of cattle that is indigenous to the island of Ireland, has a very natural adaptability to thrive whatever the farming system is, means that the breed has a future that is promising and encouraging and it is down to the hard work put in from the Society and from the breeders in promoting and producing an animal that ticks all the boxes when it comes to farmers looking an easier kept breed.

For anyone wanting to purchase an Irish Moiled the Autumn Magnificent Moilie Online Timed Auction is taking place through auctioneers Harrison & Hetherington from 7pm on Tues 27th September concluding 7pm on 29TH September.  It is necessary to register with H & H to be able to bid.  There are many vendors that have taken the necessary action to secure the necessary approvals regarding the new BVD trade requirements to be able to export to the ROI.  Several of the animals entered in the Magnificent Moilie Online Sale were also entered in the online show.

Reserve senior champion was won by Woodbine Casper EX97 bred by Ciara and James White Co. Wexford dam Glassdrummond Lily 18 VG88, sire Tully Jack EX92 now the main stock bull of the Ravelglen herd of Brian O’Kane, Martinstown, Ballymena.  This powerful stock bull is the highest classified bull in the breed and has an array of winnings, the latest was in July when he was awarded the overall breed champion in the recent (NI) Irish Moiled Cattle Society National Show held at Randox Antrim Agricultural Show 2022.

Intermediate champion in the haltered section was won by Joe Boyce from Co. Limerick with Beechmount Lizzie who he purchased in last year’s Magnificent Moilie Online Auction from the renown Beechmount herd of Robert Boyle based in Millisle, Co. Down.  This heifer is just fresh from showing in the live classes at the recent Tullamore show in August where she won overall breed Champion.  Reserve intermediate champion in the haltered section went to Meencraig Cassie bred by Gerard McCloskey of Co. Derry/Londonderry and now owned by new and up and coming Irish Moiled breeder Odrahan O’Neill from Strabane, Co. Tyrone, this heifer has also won red rosettes this year at local agricultural shows in Northern Ireland.

Junior Champion in the haltered section went to N & M Moilies (Nigel Edwards & Michelle McCauley) with Curraghnakeely Sylvia 0563 this eye-catching young heifer won the prestigious title of not only Junior Champion but the even more prestigious title of Overall breed Champion at the RUAS, Balmoral Show in May 2022.  It was this heifer who ended up being crowned reserve overall haltered champion in this year’s online show. Reserve Junior haltered champion went to a beautifully marked heifer Ravelglen Dolly 131 bred and owned by Brian O’Kane.

It was in the senior category of the non-haltered section, the cow class, which had one of the biggest classes of 21 entries that Judge Dan Bull choose not only his overall non haltered senior champion Curraghnakeely Cherry 45 but also his reserve senior champion Glassdrummond Cherry 111 both exceptional cows bred and owned by Sam Smiley of Ballynahinch, Co. Down.

Junior Champion in the non-haltered section was won by a powerful, perfectly balanced heifer, Curraghnakeely Sylvia 0576 exhibited by N & M Moilies (Nigel Edwards & Michelle McCauley) she went on to win the overall reserve non- haltered champion. Another strong and fine example of the breed was Hollymount Charlotte who took reserve junior champion owned by Robert Boyle.

Congratulations to all that entered the show and thank you all for taking the effort to do so and making it a difficult but pleasurable experience in judging the tremendous array of animals forward.

Personally whatever pictures I take, they look nothing like the animals I am looking at!

The pictures, and especially the videos sent in vary very widely in capturing the animal at its best, as always, I have judged what is in front of me on the day.

All the animals’ forward states that the Irish Moiled breed is in good hands and has a future in modern farming practices.

I was looking for well balanced, structurally correct, length in areas such as plates and loins, depth of body, width of pins and hips, good locomotive and great Moilie character and colour in my placings of all the classes.

The two tremendous senior cow classes were packed with quality throughout and as you can see, it is from here that I found my supreme overall champion in Burren Princess Pandora, presented by N+M Moilies and also the reserve supreme overall champion the 12-year-old cow, Glassdrummond Cherry 45 from Sam Smiley, 2 completely different types of animals but both are wonderful examples of the breed.

Once again congratulations to all and thank you for allowing me to judge the show.