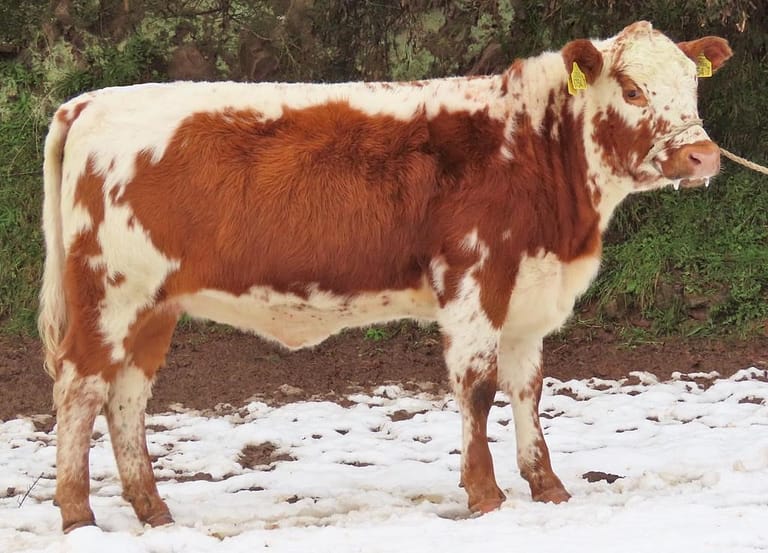 Denis and his wife Theresa Roberts, Queensland farmers in Australia who also own AAA Genetics (Australia) purchased the top three priced females as part of their second project of importing Irish Moiled embryos to breed fullblood Irish Moiled cattle.  In 2020 the first project of AAA Genetics was to introduce the first Irish Moiled semen to Australia and New Zealand which they successfully completed and presently are negotiating the export of semen from two more Irish Moiled bulls.  Denis and Theresa are planning a visit to Irish Moiled herds here in Northern Ireland, Republic of Ireland and in Great Britain to source the very best bloodlines they can to continue their ambitious project that hopes to see them one day being able to offer Irish Moiled beef in restaurants and supermarkets in Australia.

Renown Irish Moiled breeder, Robert Boyle from Millisle, Co. Down also had a very successful sale selling a homebred 18-month-old heifer Beechmount Louisa for £2,700 purchased by newly established breeder Christine Taylor from Lisburn, Co. Antrim.   Beechmount Lousisa is out of Clandeboye Louisa VG85 bred by Cladeboye Estate, Bangor, Co. Down and sired by Curraghanakeely Masterpiece EX90 bred by Nigel Edwards, Tempo, Co. Fermangh.  Robert Boyle went on to sell four other females at the sale at prices of: £2,600, £2,400, £2,300, and £1,600.

Females met an insatiable demand with an average of £2,300 for 10 females.

The IMCS would once again like to thank Harrison & Hetherington Auctioneers, to everyone who put in the hard work in the run up to the sale, to all the breeders who entered cattle and especially wishing everyone success with their new purchases.

The IMCS have a very busy season ahead with plans to have the Magnificent Moilie Autumn Online Sale at the end of September but before that and fast approaching is finally the start of Agricultural Shows which hopefully members will support and enter cattle into Irish Moiled classes.   It has been over two years from any local shows have taken place.  A tough time for show committees but no doubt there is now a lot of hard work going on behind the scenes to get the shows up and running again. It is a super opportunity to showcase the breed at any of these agricultural events.  Kickstarting the show season is Balmoral Show which is happening in two weeks’ time when classes for the Irish Moiled cattle will commence at 10am on Wed 11th May, being judged by Derek Steen from Moffat, Dumfriesshire, Scotland.

On Tues 21st June at 7.30pm there will be a breeders classification workshop to be held at Robert and Linda Davis farm, Doagh, Ballyclare, Co. Antrim (covid restrictions will be adhered to and limited spaces apply, booking is essential please contact the breed secretary for more information and to book your place please email Breed Secretary Gillian at ).

A beef breeders’ day will be held at Killua Castle, Co. Westmeath on Saturday 3rd September where breeders will have the opportunity to have a guided tour of the meat plant and castle, visit the Irish Moiled herd and deer rounded off with some delicious food.

The virtual Irish Moiled online show takes place on Sat 10th September, it is a perfect occasion for all three constituencies to compete together with no hassle of having to leave the farm.  The next few months of hopefully good weather and longer evenings will provide the favourable opportunity to get out photographing and taking videos of your cattle.  Judge this year is Dan Bull from Duffriesshire in Scotland.

This year’s IMCS AGM will be held virtually on Wednesday 3RD August (Information on this will be available shortly) Meantime keep updated by following the Irish Moiled Cattle Society website, Facebook, Instagram, and other social media outlets.  If you want to enter any of the above or find out more information, please contact breed secretary Gillian at