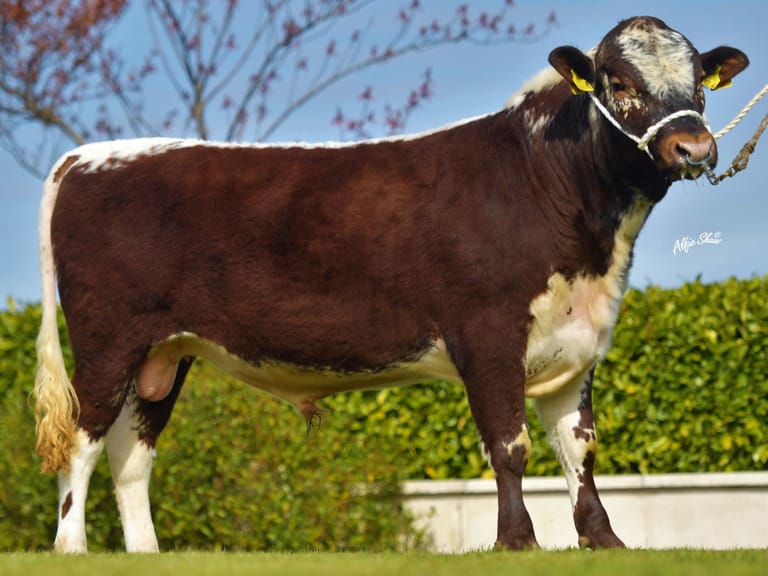 The recent Irish Moiled Cattle Society online sale conducted by Harrison & Hetherington Auctioneers, Carlisle, consisting of both pedigree Irish Moiled bulls and females was once again heralded a resounding success for the breed.

Breeders from across all the Irish Moiled Cattle Society’s three constituencies, Northern Ireland, Republic of Ireland and Great Britain came together to offer some of the absolute best Irish Moiled genetics in the world.

Topping the bidding of the sale was Ballyreagh Lily 6737, a 1-year-old heifer owned by William Edwards, Tempo, Co. Fermanagh which sold to £3,200 setting a trend after the first two online Irish Moiled cattle sales, Ballyreagh Lily 6737 is the third female animal to cross the £3,000 mark from the well-established and highly regarded Lily cow family.

Ballyreagh Lily 6737 was knocked down to Garrett O’ Donnell of Enniskillen, Co. Fermanagh but this was not the only animal to catch the eye of this pedigree Irish Moiled breeder who went on to secure for his Rossigh herd the top priced bull, (3rd highest price of the sale) Curraghnakeely Gypsy King at £2,600 consigned by N & M Moilies (Nigel Edwards & Michelle McCauley) bred by Nigel Edwards of Tempo Co. Fermanagh, the Curraghnakeely herd being a sister herd to the Ballyreagh herd owned by William Edwards (father). The Gypsy King is a promising young bull, his pedigree is saturated with high Excellent classified animals, his dam is the highest (joint equal with 1 other cow) classified in the breed – Glassdrummond Cherry 58 EX95, his sire is one of the highest classified bulls – Castledale Maurice 2 EX94.

The second highest price of the day was £3,000 for another consignment of N & M Moiles (Nigel Edwards & Michelle McCauley), Curraghnakeely Bluebell 0542 a powerful stylish 1 year old heifer which has all the potential to become a real cow maker with a bright future in the showring, purchased by a first-time buyer of Irish Moiled’s, Richard Ferguson from Downpatrick, Co. Down.

Another junior bull, Lisnolan Croaghaun Mountain, aged 11-months-old, a well-balanced typically coloured young bull bred by Sean Hyland of Castlebar, Co Mayo sold for £1600 and will be making the journey across the water to Phillipa Milligan in Lancashire, England. Beechmount Big Mac a powerful 18-month-old bull sired by the highest classified bull in the breed, Tyrone Firecracker (EX96) owned by Robert Boyle also made £1600 and will be making his way to Alan Campbell of Finvoy, Co. Antrim.

Brian O’Kane Chairperson of the Irish Moiled Cattle society congratulated the breeders who entered the sale, saying they are all to be commended on the standard of the stock put forward.  When selling through an online sale it really does pay off to take time to take good photos and videos of well-presented animals.  Also, on behalf of the Society Brian went on to thank Harrison & Hetherington Auctioneers, Carlisle for all their help and support in providing an online platform which opens to a wider marketplace and makes it possible for breeders from all three constituencies to be able to sell or purchase cattle.

Brian O’Kane Chairperson commented that success is only possible with the inclusion of all the sellers, buyers and not forgetting to mention the underbidders. For those who missed out this time we hope they will be successful in purchasing at our next online sale in September.