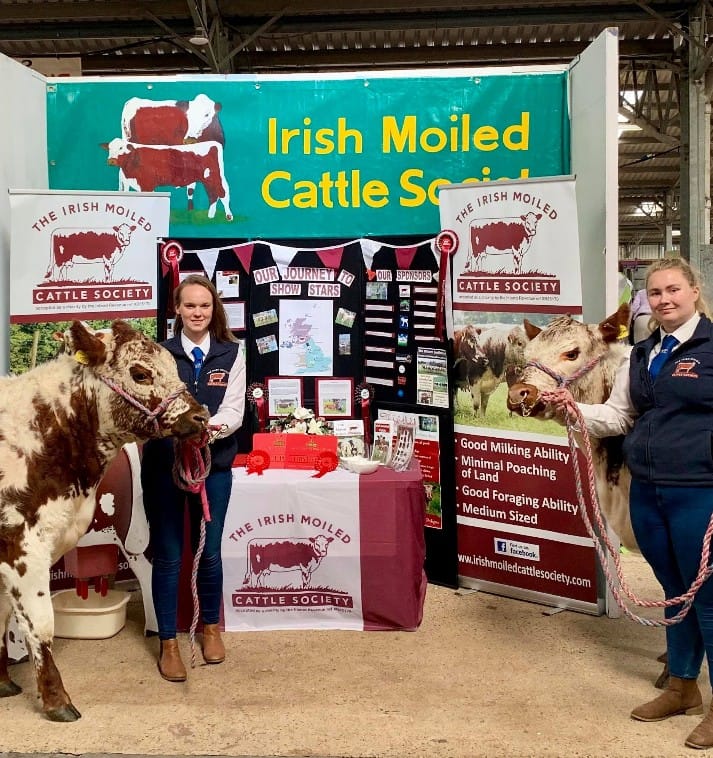 The ‘Mighty Moilie’ team Rachel Armour from Co. Londonderry and Alanna Bloomer from Co. Tyrone made Irish Moiled history at the 2019 National Young Stars event held at Three Counties Showground, Malvern when they won the dual purpose/untrimmed cattle category.   Rachel was one of three young people selected overall to represent the UK at a Young Handlers Stock judging event to be held at the winter fair in Toronto, Canada in November.  The National Young Stars event is in its fifth year, but it is the first time the Irish Moileds were represented.  The event sponsored by Allflex is hugely attended and followed by dedicated up and coming agricultural minded young people.

Long before the competition date in August, competitors as part of the National Young Stars guidelines must try to source sponsors.  The ‘Mighty Moilies’ were very fortunate to manage to secure a number of sponsors from Northern Ireland, Republic of Ireland and Great Britain, they also designed key rings to sell and organised a cake sale, the money was then used to fund their trip from Northern Ireland, stopping off in Moffat to collect the two heifers before heading to the South of England.  Farm Wardrobe supplied their promotional clothing which added to their professional appearance.   Derek and Cindy Steen from Moffat in Scotland halter broke two heifers which the two girls along with Rachel’s father transported to the showgrounds.  The promotional stand with breed information, leaflets, sponsors, profiles on themselves and their journey to the National Young Stars was put together by the two girls, which was also transported over to England from Northern Ireland.  Over the two days they were judged on their teamwork, preparation of the cattle, ring-craft, breed promotion and stock judging.

Irish Moiled Cattle Society Director Chris Ball from Uttoxeter in England made the trip down to the Three Counties Showground to support and encourage the ‘Mighty Moilie’ team, he was extremely proud of the two girls who had made such a long journey over to represent the breed, how they presented themselves and their two heifers Ballylinney Lily and Ballylinney Damson. Two definite ambassadors for the breed in the future.

It was the icing on the cake to see the ‘Mighty Moilie’ team win and for Rachel to be selected to represent the UK at a Stock judging event at the Winter Fair in Canada. The Irish Moiled Cattle Society are delighted for Rachel and Alanna and their success at the National Young Stars and will be following Rachel’s next adventure.

RACHEL AND ALANNA’S JOURNEY TO THE NATIONAL YOUNG STARS-
“Both Alanna and I come from an agricultural background. We didn’t grow up with ‘Moilies’ but have come to appreciate them through seeing them at the various shows.  I got my first Irish Moiled heifer as a surprise 21st birthday present , she was called ‘Beechmount Lily’  Alanna who also has Dexters had been following the Irish Moiled breed in the show circuit and when the opportunity arose in November past to purchase two  heifers from the Beechmount herd of Robert Boyle’s she didn’t miss it. We both competed at the summer agricultural shows in Northern Ireland. I was elected as an Irish Moiled director in 2018 and I put forward to the board about the National Young Stars event which previously had been discussed at a meeting by another Director as a terrific opportunity for young people and for promoting the breed especially as numbers of Irish Moileds in GB were declining. The initial reaction was of mixed views.   GB directors Derek Steen stepped in and offered the use of two heifers and Chris ball offered to help with this journey.  This was the start of a very long road filled with ups and downs. The real work began in January 2019 when we went over to see and chose two of Derek’s heifers to be halter broke.

We then contacted various companies for support. The RBST in GB covered our entry fee for the team, which was the starting point of getting to work, making up a stand and the quest to obtain more Sponsors. We were overwhelmed with the support we gained through various businesses, we needed to source and take everything from the animals, their feed, to our clothing. Not everything was plain sailing, we had a change of team member due to their personal and work commitments.  She was devastated not to be going but was glad to hear that Alanna was able step in so that the ’Mighty Moilie’ team could still attend.  I am more than grateful to Alanna stepping in at the last minute, she was an amazing teammate and we worked so well together.  Overall this was a great experience and we are still taking it in that we won! We both can’t quite get over it. To top to off I am amazed I was chosen to go to Canada to the winter fair in Toronto!

I would like to take this opportunity to thank everyone that backed us, especially to the Irish Moiled Cattle Society directors, its members and those outside of the breed who donated or purchased a keyring, without them we wouldn’t have ever made the long but very rewarding journey.  Special thanks to all our sponsors RBST in GB, RBST NI, Farm Wardrobe, Plantation Press, Fane Valley, Swatragh Livestock Mart, Northern Counties Co-Opertive Enterprises ltd., Mourne Rossettes, Chatterbox Parlour, The Palms,  Thompson’s Feeds, Apple Green, Challow Hill Meats, Mount Briscoe Organic Farm, Chris Ball, Trevor Chadwick  Ravelglen Herd and N & M Moilies.”