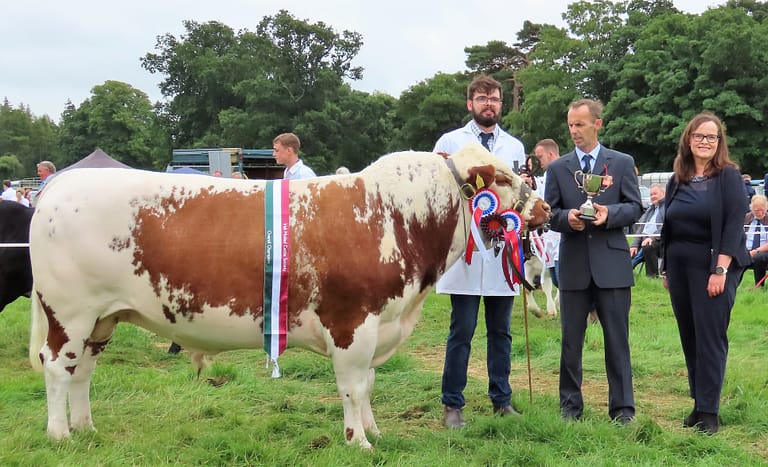 There was a record-breaking number of Irish Moiled’s at the Northern Ireland Irish Moiled Breed National held at Randox Antrim Show with upwards of forty entries in total.

Judge Trevor Chadwick all the way from Co. Galway was delighted with the turnout, standard and presentation of the cattle and how well the cattle were handled and well behaved, a real credit to all the breeders involved.

It was quite a spectacular sight for anyone watching, especially the maiden heifer and the heifer calf classes when the ring was filled with top-quality animals, nearing up on ten entries in each of these classes.

It was the senior champion and the reserve senior champion that went all the way to claim the overall supreme breed champion and reserve supreme champion spot with judge Trevor Chadwick commenting…. it could have went either way for these two heavyweights as both animals were very impressive, he finally gave the overall supreme champion slap to the powerful correct heavyweight senior bull  Woodbine Casper owned by Brian O’Kane, Ballymena bred by Ciara and James White, Co. Wexford with overall reserve supreme breed champion going to the heavyweight cow and calf outfit Curraghanakeely Sylvia 1st, a homebred 9 year old cow with her seventh calf at foot exhibited by N & M Moilies (Nigel Edwards & Michelle McCauley) of Dungannon.

In the senior heifer class, once again quality was the name of the game, with the prize winners in this class having previously won at local shows. A very stylish 2-year-old heifer, Beauty Hill Judith, sired by Atlantic High Tide, owned by Albert and Jacqueline Baxter took the red ticket. Second place went to Ballylinney Alice 1912, sired by Ballylinney Palmer, exhibited by Rachel Armour of Maghera. Third place went to Beechmount Louisa, sired by Curraghnakeely Masterpiece, owned by Denis Reddick of Lisburn.

The senior bull class was the class from which judge, Trevor Chadwick would go on to pick his overall supreme champion.  The top two spots in this class went to bulls bred by Ciara and James White, Co. Wexford, both sired by Tully Jack EX92, both displayed great power, strength, and plenty of breed character. It was the 5-year-old bull, Woodbine Casper owned by Brian O’Kane of Martinstown that took the red rosette, Woodbine Casper is no stranger to the show ring having won numerous championships and just recently Holstein UK scored Woodbine Casper EX97 the highest score for any Irish Moiled on record. Second place going to the 3-year-old bull Woodbine Eddie, owned by Andrew Mc Connell.

There may have only been one entry in the junior bull class, but quality was plenty as noted by the judge.  A promising young bull Curraghnakeely Rojo sired by Waikato Alister deservedly took the red rosette, exhibited by N & M Moilies (Nigel Edwards & Michelle McCauley).

The judge commented that the young handler class is one of the most important classes of the day.  He loves to see young people get actively involved and be enthusiastic in the Irish Moiled breed. The judge commented on how professional these young people were when showing their animals.  1st Hollie O’Rourke, 2nd Sommer Garrett, 3rd Emily Scott and 4th Cary Logan.

Breed Secretary Gillian Steele presented Rachel Garrett with the N & M Moilie perpetual cup for the best novice breeder who had attended the most shows. The Irish Moiled Cattle Society would like to thank Randox Antrim Show for hosting the Northern Ireland National, to Judge Trevor Chadwick who did a phenomenal job judging the largest turnout of Irish Moiled’s on record, this era.  To the stewards who were fantastic in keeping everything running like clockwork, to the sponsors Fane Valley, Ulster Bank, Laurel View Farm, David and Sandra Scott and finally to all the exhibitors including the young handlers for putting on a fantastic display of Irish Moiled cattle