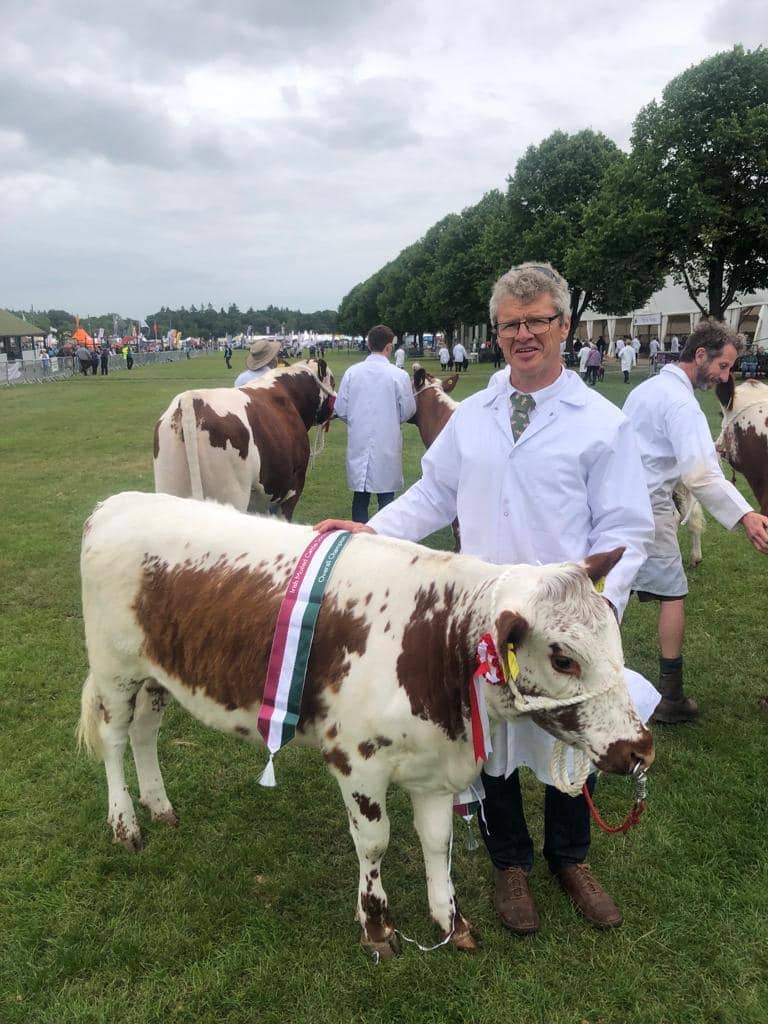 The annual Royal Three Counties Show takes place at the Three Counties Showground in June.  With over 120 breeds of animals across 25 judging rings including 54 rare and minority breeds boasting the largest numbers of rare breed livestock in GB.

Numbers of Irish Moiled cattle may have been smaller than in previous years, but quality and enthusiasm was prevalent.

Cian Elliott has given an insight into his first time showing at The Royal Three Counties Showgrounds. Cian hopes that his experience will encourage others especially new breeders to enter their cattle to help showcase the Irish Moiled breed at one of the largest and best shows for rare and minority breeds.

at the Royal Three Counties Show 2022

I entered the show in mid-April 22 with some trepidation, as my only previous experience was last year’s Irish Moiled Online show.

I selected two heifers and spent time getting them used to the halter and being handled. Progress was steady but one was a bit too nervous for my liking when other people were around, so I swapped her for a quieter, less showy cow (a good decision, I now feel).

My son Harry had been helping with cattle training and agreed to come and give me a hand at the show––thank-you Harry, I couldn’t have done it without you.

We headed off to the Malvern Hills arriving at the Three Counties show ground on Friday evening. We were directed to our stalls in one of the cattle buildings where bedding straw had been left ready.

The other Irish Moiled exhibitor had already arrived and was pleased to see us––always a good start!

The show facilities were excellent, with the washing area, cafe and bar all within sight.

Once cattle were washed and bedded-down, we parked in the exhibitors car park and camping area, which again had excellent hot shower and toilet facilities.

On Saturday, we watched a great selection of cattle being shown and had a look around some of the show stalls. Rain had stopped play for some outdoor stalls, but the cattle sheds were dry and airy.

Encouraged by Elliot––an Irish Moiled cattle handler––we took part in the Grand Parade on Saturday afternoon. This involves as many exhibitors as are willing, leading their animals from the sheds along a spectator lined walkway to the main arena. It was quite a sight, with so many breeds of cattle, sheep, and pigs paraded in one display. It also enabled the animals to become accustomed to the sights and sounds of the show ground. I think my Moiles were reasonably well behaved, considering it was a far cry from a bit of quiet grazing at home!

There was a stockman’s meal on Saturday evening followed by live music, which sounded great from outside. I should have bought tickets before it sold out––maybe next year.

Sunday was the rare breeds show day, and with animals washed, we were ready. As one of only two Moiled exhibitors, we were in the Any Other Rare Breeds category.

As a result, Daisy got put forward for the rare breeds competition, in which she was awarded Reserve Champion.

Together with the Woodhouse herd bull, we also entered the Interbreed pairs class, and, although more ‘little and large’ than a pair, it was good to be out there showing them off as much as possible.

To top it off, Daisy was then awarded a sash for Overall Champion Irish Moiled by Mr Dan Bull from the Irish Moiled Society.

The rare breeds then led Sunday afternoon’s Grand Parade around the main arena. Adam Henson was co-hosting, asking exhibitors about their breed and it’s unique traits.

I thoroughly enjoyed the show experience and the chance to show off our Moiles. It made all the efforts and preparation well worth it.

The show ground and facilities were excellent and well organised.

The other cattle exhibitors were encouraging, and the atmosphere was great.

If we could get one more Irish Moiled exhibitor next year, we could have our own class, which would be grand.