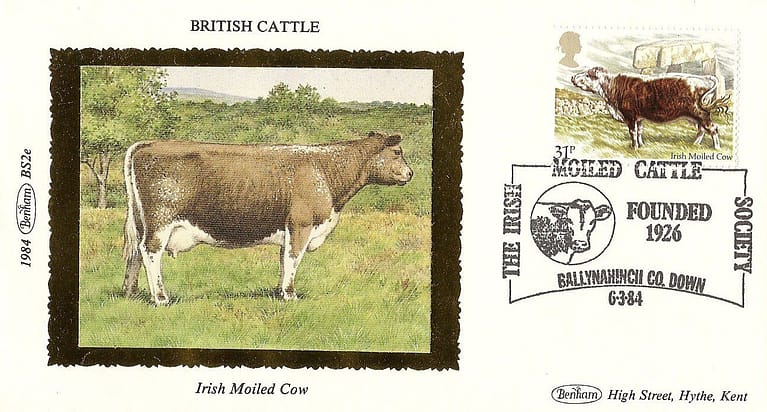 The Society was formed in 1926 to develop the breed and create and maintain a Herd Book. Much support was attracted and cattle from all over Ireland were inspected, selected and entered in the Herd Book.  For many years, as popularity of the breed grew, classes were held at the Royal Ulster Show.

However with the introduction of new, more specialised dairy and beef breeds numbers of Irish Moileds began to decline. The Society declined in parallel with the cattle numbers and was disbanded 1966. The decline was so dramatic that by the 1970’s the breed had been reduced to less than 30 females maintained by two breeders in Northern Ireland – David Swan of Dunsilly and James Nelson of Maymore.

In 1982 the Society was revived with the encouragement of the Rare Breeds Survival Trust. Since then numbers have increased substantially with help from valuable research and guidance from both the Trust and the Genetics Department of Liverpool University. This encouragement has been greatly appreciated by the Society.

In 1998 the Society became a company limited by guarantee and also gained charitable status.  Directors are elected annually by members.,

Today the Society has a well established DNA testing programme to ensure validity of pedigrees and the integrity of this important gene pool. Every animal must now be DNA profiled and parentage proven before it can be registered.

In 2013 the Society introduced a Linear Type Classification system to help improve functional and structural traits within the breed. This independent evaluation will become an invaluable tool for breeders looking to select breeding stock from the most consistently high scoring cows families.

In 2021 following the United Kingdoms exit from the European Union the unanimous decision was made by the Directors to move the Society’s Company operations to the Republic of Ireland to ensure the Society and the Breed moved forward in this new era as one united identity. The aim was that no one from the three constituencies would be left behind, or excluded from any part of the Society, or their animals from the Herd book.

The first action required was to set about moving the Company address to a place under the jurisdiction of the European Union. An address in Co Donegal as part of Ulster was selected as recognition of the origins of the breed and the Society continues to enter Pedigree Irish Moileds into the Irish Moiled Cattle Society Herd Book.