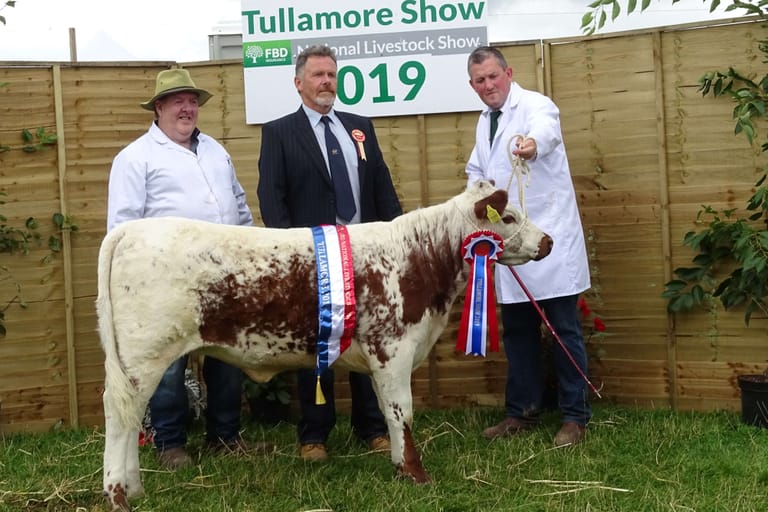 Robert Boyle of Millisle Co.Down owner of the well-known Beechmount Irish Moiled herd had the privilege of judging the Irish Moiled classes at Tullamore Show.

The first class of the day was of a very strongly contested class of calves born in 2019, Seamus Holmes from Killygordon, Co. Donegal won the class with a Fenurary born heifer calf, Dungallia Val An Ti. Second place went to Ciara White from Ballymitty, Co. Wexford with a January born bull calf, Woodbine Eddie and third place also went to Ciara White with a January born bull calf, Woodbine Ernie.

In the bull class the red rosette went to a young bull of Ciara White’s – Woodbine Casper.

In the Breed Championship line up it was Seamus Holmes’s homebred junior heifer: Dungallia Maisie who won the Overall Championship with Ciara White taking Overall Reserve Champion with her cow Woodbine Bridie.

The Irish Moiled Society would like to thank the committee of Tullamore Show especially Trevor Chadwick for all their help and support.

I was delighted to be at Tullamore on Sunday 11th Aug to judge a fantastic line up of Irish Moiled Cattle. All the animals shown were a credit to their owners.

In the calf class my first choice was a young homebred heifer calf presented by Seamus Holmes.  This traditionally marked calf was showing a lot of style at such a young age and I’m sure we will see a lot more of her in the future.

In the bull class Woodbine Casper presented by Ciara White was a fantastic structured bull, nicely marked with length and width.  A fine example of the breed which any herd would be glad to have as their stock bull.

In the cow class I opted for Woodbine Bridie a lovely medium sized cow well marked and in great show condition. This young cow has a lovely udder and is doing a lovely job on her first calf, a great asset to any herd.

In the maiden heifer class I was instantly impressed by a young heifer Dungallie Maisie bred by Seamus Holmes ,an embryo transfer calf that  showed great presence in the ring .She has a lovely sweet head with a nice bit of width at the shoulder which follows right through to her hindquarters and a great top line . A perfectly balanced young heifer from head to foot that I am sure we will be seeing a lot more of in the future.

The championship line up was impressive and it was a very difficult decision but ultimately, I was once again drawn to the impressive young heifer Dungallia Maisie which I tapped out as champion. With Reserve going to the sweet young cow Woodbine Bridie.